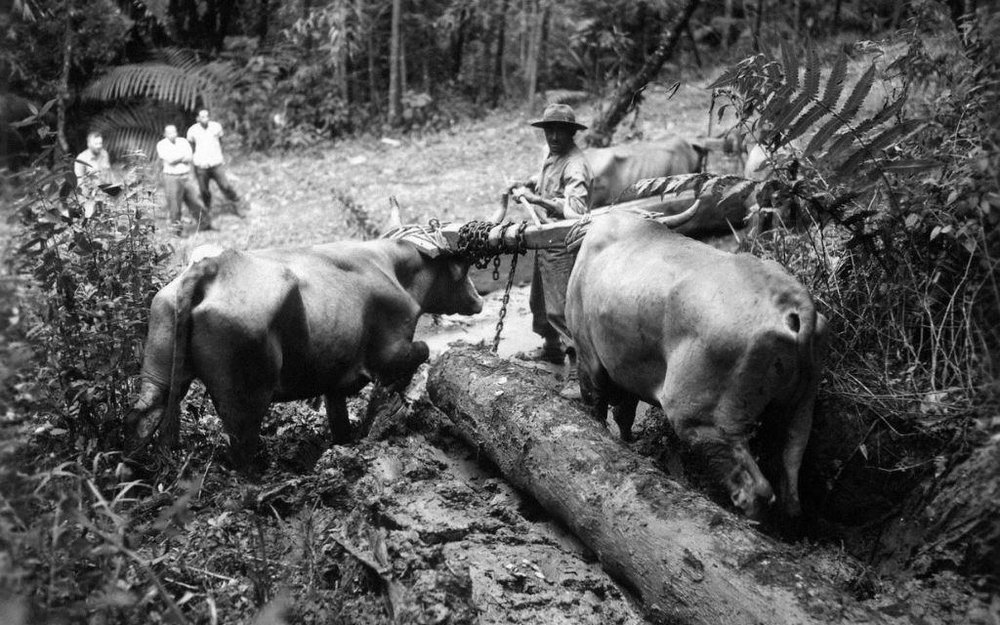 Europeans made contact in Puerto Rico during the 1490s and by the early 1500s colonization had begun in the river valleys flowing out of the Luquillo Mountains. At that time, the island’s indigenous peoples were in conflict. Soon, gold was found in the sands of Río Blanco, Río Canóvanas, Río Espíritu Santo, Río Fajardo, Río Grande, Río Mameyes, Río de la Mina, Río Prieto, and Río Sabana. The first discovery was in 1509, and placer mining was underway in the Río Fajardo and Río Blanco around 1513. Mining was the island’s most important economic activity during the early 16th century, including the eastern mountains. The period of greatest mining activity ended around 1530 when the houses of miners were attacked and burned. Forced labor, introduced diseases, confrontations, and migrations elsewhere devastated the island’s indigenous population by the mid-1500s. As late as 1582, colonists reported the mountains as unsafe because they were still occupied by hostile groups.

During the 1600s, Puerto Rico remained isolated with only three populated areas and residents lived through contraband. In the 1730s, coffee was introduced and planted on the lower slopes of the Luquillo Mountains. Settlement in eight towns surrounding the Luquillo Mountains took place between 1772 and 1890, with the greatest influx after 1820. In 1815, the Cédula de Gracias conceded Crown Lands on the island for agricultural development, stimulating the local economy through new farms and businesses. During the 1830s, some of the lands made available were situated in the Luquillo Mountains. Between the mid-1830s and the mid-1890s, timbers were cut on the lower slopes of the mountains, including the Bisley, Jiménez, and Mameyes watersheds, and exported through the coastal town of Luquillo. Subsistence crops were planted as Spanish Crown lands decreased in area.

As early as 1839, however, the Spanish expressed concern regarding the protection of forests, fish, and wildlife within the mountains. In 1853, two Spanish foresters were sent to survey and manage Crown Lands, including those of the Luquillo Mountains. The 19th century in Puerto Rico was characterized by a rapid increase in population, an increased demand for agricultural land, poor farming practices, constant political disturbances, a lack of communication between metropolitan centers and the rural population, and a scarcity of personnel and budget for forestry activities—all of which led to the dramatic decline of the island’s forest cover (Domínguez Cristóbal 1989).

In 1876, Spanish King Alphonso XII proclaimed forest in the Luquillo Mountains as a reserve of 10,000 hectares (24,710 acres) with soil and water conservation and timber removal regulated and enforced by the Inspección de Montes (Spanish Forest Service), making it today one of the oldest forest reserves in the Western Hemisphere.  In 1885, a forest guard was assigned to patrol the Luquillo Mountains. At that time, transportation problems were a major deterrent to timber exploitation.