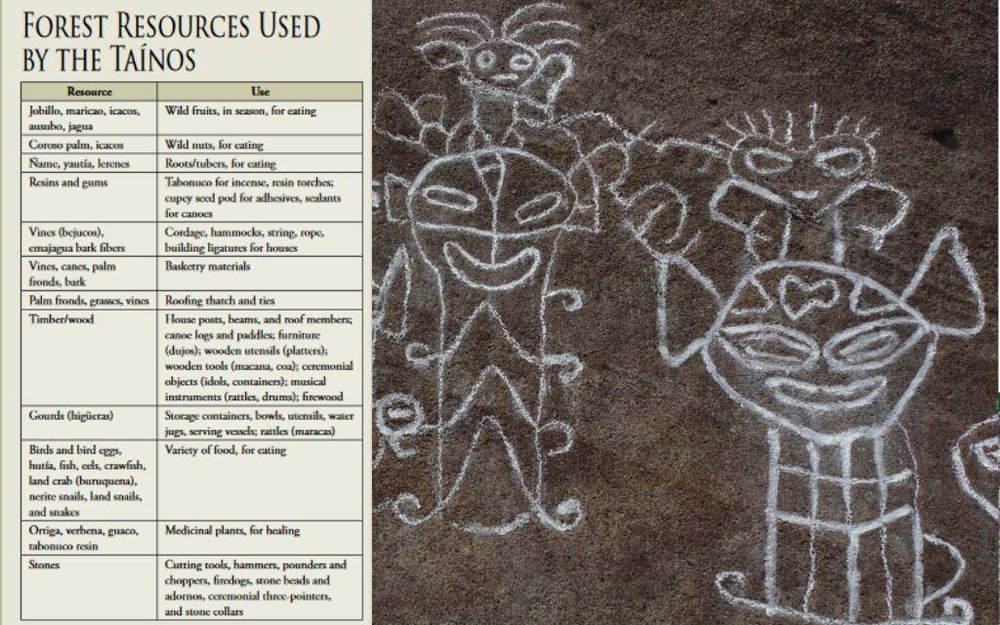 During this time, El Yunque (Luquillo Mountains) was known as Yukiyú. Tainos referred to the El Yunque peak and surrounding forest as Yuké, or white land, in reference to the cloud covered summits. The forest’s current name, El Yunque (i.e., meaning anvil in Spanish), is a corrupted derivation of the Taino word (Domínguez-Cristóbal 1997a, Moran Arce 1971). Although some may believe that the mountains resemble an anvil, most will agree that the summits are a cloud covered much of the time. Also, some say that the word Luquillo is derived either from the name Yukiyú or from Loquillo (Barnat 1987). Both refer to a previous indigenous chief of the early 1500s noted for his guerrilla warfare against the Spanish. Loquillo and his followers hid in the forests at the base of the Luquillo Mountains.

Archaeological finds confirm the presence of pre-Columbian cultures in Puerto Rico around 300 B.C. and new discoveries possibly date to 2,000 years B.C. or earlier. During the pre-colonial era, the forests on the lower slopes of the Luquillo Mountains provided indigenous cultures with a source of food and materials for the construction of shelters and boats. However, the impact of these groups on forest resources was minimal. Archaeological discoveries—including petroglyphs near and within the forest—and pre-Columbian names for different sites (e.g., El Cacique, El Yunque, and Cubuy) indicate that native peoples were familiar with the mountains. However, they were primarily agriculturalists and there is evidence that they most lived within the coastal plain – allowing access to both the forest and the ocean and their resources.

This is a type of art found carved in big rocks in the rivers and mountains of El Yunque. The petroglyphs found in the Luquillo Mountains are primarily anthropomorphic, although most of the motifs are not realistic portrayals of humans. The most common motif, with perhaps hundreds of them at sites in the region, is a simple circular face with round pits representing the mouth and eyes.